The rise in Treasury yields

The rise in Treasury yields by Andy Seaman

The sell-off in US Treasuries of late has been driven primarily by expectations that Biden’s $1.9tn stimulus package will stoke higher levels of inflation. Such inflation fears have been commonplace for almost half a century, but inflation has never materialised and nor is it likely to this time either. 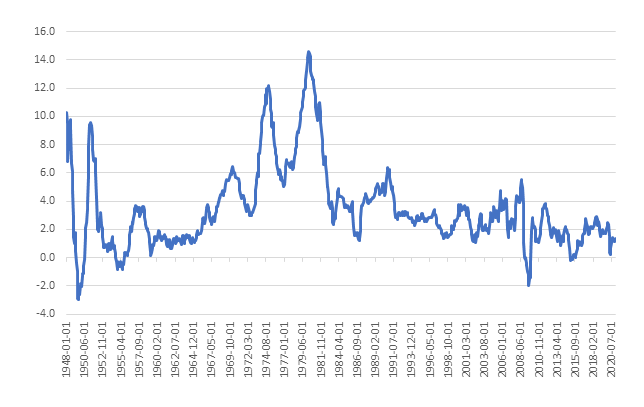 Capitalism creates competitive pressures under which disinflation, a fall in the rate of inflation, is the natural order of things. Population growth works in the opposite direction which is why the period after the Second World War, and the associated baby boom, led to rising inflation. Over time the baby-boomers have given way to Gen Xers and now Millenials and as these cohorts rise and fall in relative size so does the balance in supply and demand, which is the ultimate driver of inflation. Working age populations are shrinking in much of the developed world with Japan, Germany, China and the US all now experiencing a shrinking of their potential workforce. What we are witnessing is the ‘Japanification’ of the West, although many have failed to recognise this. This will ensure that inflationary pressures remain subdued.

As Fed Chairman Powell indicated recently (Feb 23rd) inflation and employment remain well below the Federal Reserve’s goals, meaning easy monetary policy is likely to stay in place for the foreseeable future. “The economy is a long way from our employment and inflation goals, and it is likely to take some time for substantial further progress to be achieved,” the Fed chief said when he appeared before the Senate Banking Committee. Fed policy is key to determining the long-term direction of US Treasury yields, and with the Fed on hold until at least 2023, probably longer. If anything, the recent rise in Treasury yields is putting back any recovery as rising yields are an effective monetary tightening as higher rates feed into the economy, particularly through the housing market.

So, rather than a negative, we view the recent backup in yields as providing an opportunity for investors to lock in higher yields that are unlikely to remain for long. Given the scale of 2020’s pandemic-induced economic decline, 2021 is guaranteed to see a strong economic recovery, but the impact of this is short term. Based on current IMF forecasts, combining 2020 and 2021 growth rates will still see many countries below the GDP levels of 2019 with only three of the G20 countries above that level even by the end of this year. The fact that many countries will be below 2019’s output even at the end of 2021 reinforces the idea that central banks are highly unlikely to be raising rates in 2021. In fact, it will be a number of years before economic growth returns to levels where labour is in short supply and economies are operating close to potential.

Although our funds only hold investment grade bonds at this time, credit spreads are determined by relative pricing. With US High Yield trading around 4.5%, well below the lows of the past decade, investment grade bonds, particularly the undervalued ones held within our portfolios, have plenty of scope to rally further. Investors still need income, increasingly so in a world of ageing populations, and that backdrop is supportive for fixed income assets in general, particularly high-quality investment grade bonds which have both a relatively high yield and defensive characteristics at the same time.